In Turkey, life for Syrian refugees and Kurds is becoming increasingly violent 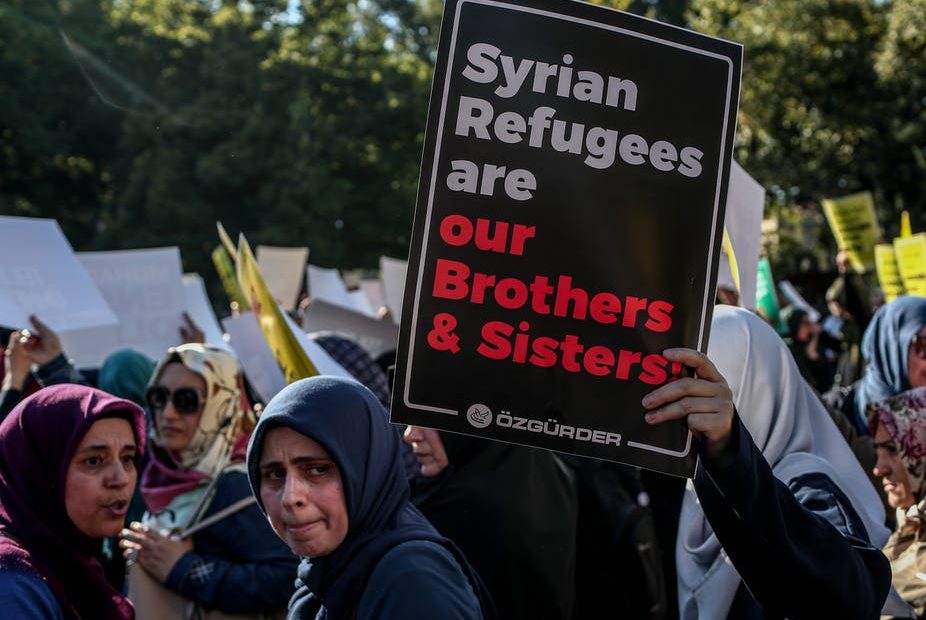 A spate of attacks in Turkey on Syrian refugees and Kurdish internal migrants and displaced people in recent months have put both communities on edge. In July, a Syrian teenager working as a market seller in Bursa, northwestern Turkey, died after he was attacked by a group of men.

Another Syrian teenager who worked in a bakery in Samsun, another northern province, was killed during a fight in a street in September. His brother, who witnessed it, said it was a racist attack.

The same weekend, a young Kurdish man from Van working in construction in western Turkey was shot dead and two of his friends were wounded. A week earlier, members of a Kurdish family from Mardin employed as seasonal agricultural workers in Sakarya, a Turkish province where Kurds are frequently targeted, told reporters they had been verbally humiliated and physically attacked by a group of local Turkish men.

These recent attacks against both Syrian refugees and Kurds reveal how the nationalist policies of Turkey’s authoritarian and aggressive regime are influencing perceptions and attitudes towards non-Turkish minorities – with devastating consequences.

It’s been nine years since Syrians started taking refuge in Turkey, and there are now 3.6 million Syrian refugees registered as “foreigners under temporary protection” in the country. As the conflict in Syria has turned into a protracted one, hopes that their stay would be temporary have been replaced with anxiety of a more permanent situation.

The ongoing civil war and instability in Syria, as well as a 2016 EU-Turkey deal which largely stopped people crossing the Aegean from Turkey to Greece, have made it almost impossible for refugees to consider moving anywhere else. The deal recognises Turkey as a safe country for Syrian refugees. Yet Syrian refugees and their property are often attacked by Turkish citizens.

Kurds make up around 20%-25% of Turkey’s population of 82 million. Over the past century, millions of Kurds have become internally displaced in Turkey due to the conflicts in southeast Turkey (northern Kurdistan) between the Turkish state forces and Kurdish armed groups. Northern Kurdistan – “Bakur” in Kurdish – is a reference used by the Kurdistan Workers’ Party(PKK) and other Kurdish political parties for the Kurdish-populated region in east and southeast Turkey.

A first wave of displacement happened in the 1920s and 1930s followed by another in the 1990s. The most recent wave of forced migration happened after conflict erupted in July 2015 between Turkish security forces and the PKK in southeast Turkey, particularly in the provinces of Diyarbakır, Mardin, Şırnak and Hakkâri.

Some Kurds built up optimistic expectations that they would be able to safely return to their homeland during the 40-year conflict between the Turkish government and the PKK, including in 1990s and 2000s. But the majority of displaced Kurds did not want to return due to protracted conflict and socioeconomic instability in their home regions. Government policies focusing on economic growth, rather than reconciliation and compensation for people who had been displaced, also played an important role in their hesitancy.

Aggressive and anti-democratic policies introduced since 2016 targeting Kurdish politicians and Kurdish political and cultural organisations have worsened anti-Kurdish sentiments in the country. So has Turkey’s deepening authoritarianism.

Syrian refugees and displaced Kurds have both been victims of post-conflict violence. This has included direct violence, as well as marginalisation, discrimination and cultural violence against their identity and heritage.

A report by the Human Rights Association, a Turkish-Kurdish group which monitors human rights in the country, shows how racist and hate crime against minorities, including Syrians and Kurds, have left dozens of people dead and hundreds wounded in the past decade. Four key factors appear to have led to this violence: nationalist policies, othering, polarisation and impunity.

Since the beginning of the 20th century, nationalist identity politics have played a critical role in systematic violence against minorities in Turkey, particularly Armenians, Assyrians, Greeks and Kurds. This violent, assimilationist approach is borne out of Turkification policies which promote a Sunni-Turkish identity while denying minority rights.

Political and armed resistance by minorities such as the Kurds against Turkification have resulted in violence and widespread discrimination from Turkey against those who don’t want to assimilate. The current Justice and Development Party (AKP) of the president, Recep Tayyip Erdoğan, emphasises a “one state, one nation, one flag, one language” agenda. By ignoring diversity, this is exacerbating the existing anti-minority sentiments even further.

A process of othering, dividing people into “us” and “them”, characterised by mistrust, group-based inequality and marginalisation, is also rife in Turkey. It leads to stereotypes, discrimination and social exclusion of particular ethnic groups.

Like the Kurds before them, Syrians have become the new “others” in Turkey due to the public and political debate and mass media representations of Syrians as a threat to security and economy.

Polarisation along ethnic and ideological lines also contribute to the violence, particularly when violence by both Turkish citizens and the state is not properly investigated. This encourages those who conduct attacks against refugees and displaced people, because they can easily avoid prosecution.
Both the government policies and people’s perceptions and attitudes towards Syrian refugees and displaced Kurds feed public hostility. The coalition government formed in February 2018 by the AKP and the Nationalist Movement Party – which has a remarkable ability to foment domestic, regional and international enemies – is increasingly oppressing civil society organisations and opposition parties.
Meanwhile, abusive prosecutions and the erosion of fair trials, particularly since a failed coup attempt against the Erdoğan government in July 2016, are trying to silence journalists, human rights defenders and opposition politicians. There is little chance the violence will be remedied soon.